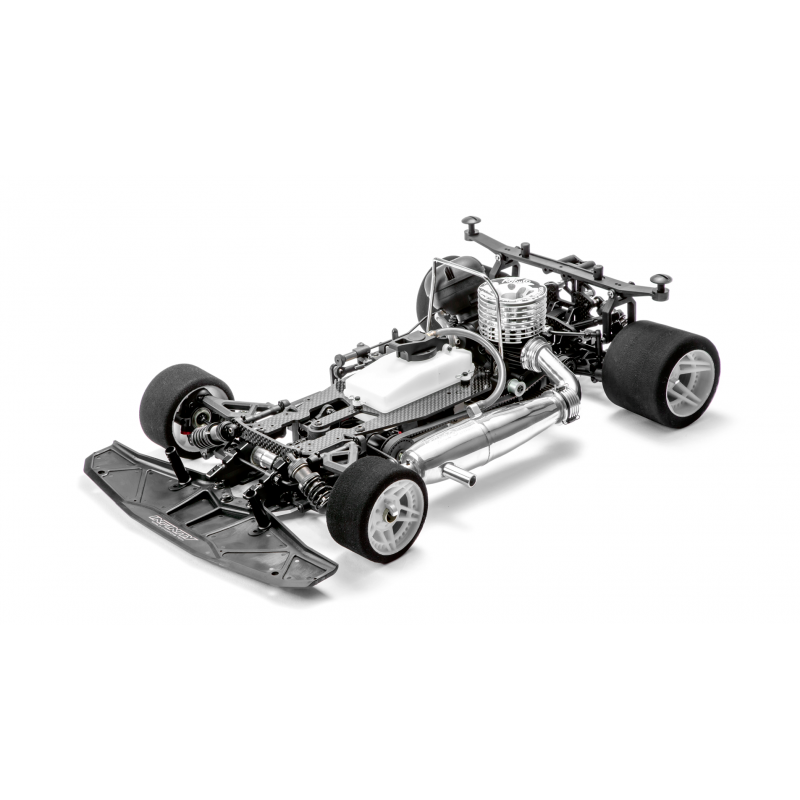 The next generation of IF18, the car which won the World Championship in 2017!
Since its debut the IF18 has been loved by 1/8 racers in many countries and has seen success all over the world.
The outstanding rear stability will remain unchanged and this time the front section has been redesigned.
INFINITY team drivers from around the world have helped with development and tested this new geometry over a long period of time to help break new ground in the 1/8 racing category.

The big weapon of the IF18-2 is that by adjusting the front roll center according to driving conditions, it is possible to fine tune your setup perfectly according to various circuits and driving styles. This allows for great steering in all corners without any excessive initial reactions which can make your car difficult to drive.
The newly designed front upper arm, lower arm and front knuckle are made of new materials with high rigidity and excellent impact resistance. Attention has also been paid to the ease of assembly and the high precision of these parts can be felt when maintaining and setting up your car.

INFINITY team driver Takaaki Shimo finished runner-up at the 2019 IFMAR 1/8 Racing World Championship in the United States. The car he used was a secret prototype of the IF18-2 and was the only one used at the event.
The conditions during this race were extreme, fighting with traction roll on an ultra high grip surface not found in Europe or Asian countries, especially Japan.
As the only prototype car being used at the race Shimo did not have the advantage of sharing team setup data, despite this the IF18-2 demonstrated its great potential only just missing out on a debut win.
Finally, IF18-2 will be released as a production model in December 2020! There is no doubt that it will dominate the race scene during 2021.

The position of the O-ring on the tank lid cap has been revised so that it provides a perfect seal, and to minimise the expansion of the O-ring due to the difference in fuel composition to ensure stable pressure. The inner diameter of the nipple has also been optimized, contributing to the stabilization of fuel adjustment.
Volume has been added around the fuel filter allowing for a stable fuel supply even when the tank is almost empty.
Extra space has been created to allow the carburetor stroke to now be "straight" in a front to rear direction, making throttle linkage setup easier.
In order to contribute to the fuel efficiency of engines that are becoming more powerful these days, the fuel tank capacity has been drastically set to "125cc over" as standard. By adding the color of OPT inside, it corresponds to the international regulation.

For ease of maintainence, the rear body mount shaft is now supplied with a stopper as standard. R0258

Markings have now been added to the spring adjusters of the front and rear oil dampers. (New)
To help with keeping the left and right adjustments uniform when adjusting the ride height, we adopted the INFINITY team driver's usual handmade marking.
This is a small but improtant message from the INFINITY development department that we want INFINITY users to know that these small details will lead to correct car setup and more fun on track.

7 other products in the same category: 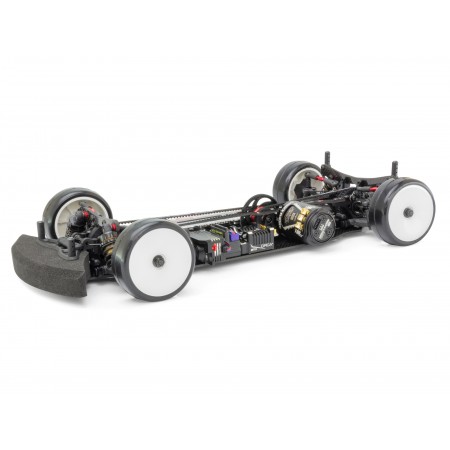 The IF14-II was created from the original IF14 car and what our designer and team drivers have realized is almost an all new platform. 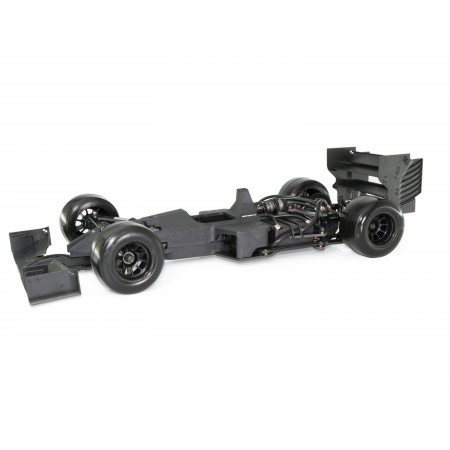 Is this a scale model car or a racing car?
Does it just look cool or does it run well too?

INFINITY has a new product that says "yes" to all these.

INFINITY has created the IF11 to awaken your passion for F1 racing.
IF11 boasts rigidity, strength and tuning flexibility to provide an excellent racing car.
The hybrid monocoque chassis resembles that of a full size racing car
Kingpins, coil-spring front suspension and side link 3P rear suspension contribute to superb handling and high traction.
The hybrid monocoque chassis has all these qualities in perfect balance

IF11 is the perfect car for Formula 1 car enthusiast
IF11 and INFINITY will keep striving to improve and push your performance to the next level. 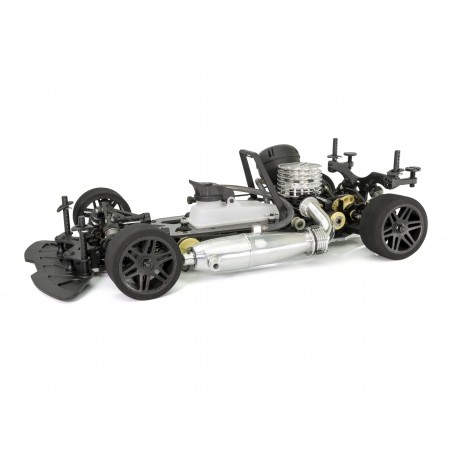 After two years of development, we have finally completed the INFINITY IF15, our new competition GP touring car. 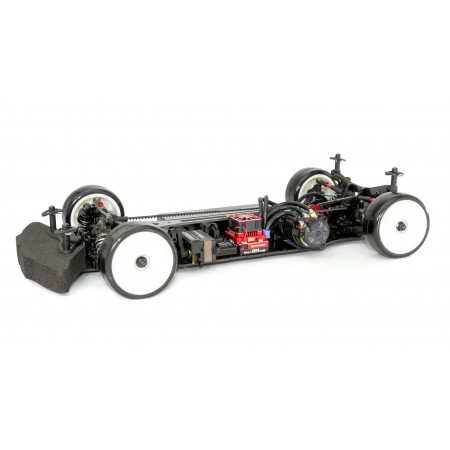 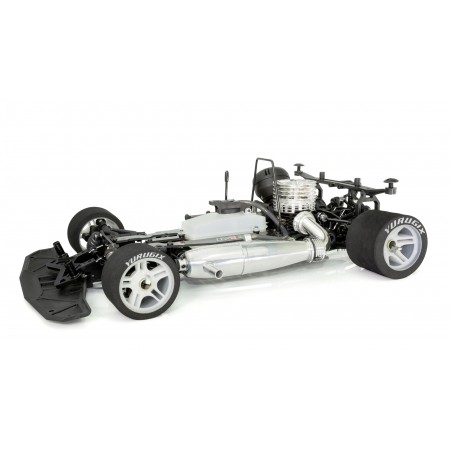 Based on our 2017 World Championship winning Infinity 1/8 platform, that also claimed TQ & Super Pole and filed 5 of the 10 spots on the grid of the Main final, the new IF18 is an evolution of that winning package. Featuring a number of significant updates, it continues Infinity’s aim to express the spirit of Japanese craftsmanship and new developments include completely new front and rear A7075 bulk head designs. Giving the car a new suspension geometry in combination with longer suspension arms for improved stability, the design has taken into account ease of access to drastically improve the ability to carry out maintenance. Other key features of the new IF18 kit include the inclusion of a light weight clutch and 2-speed. The IF18 takes a World beating to the next level. 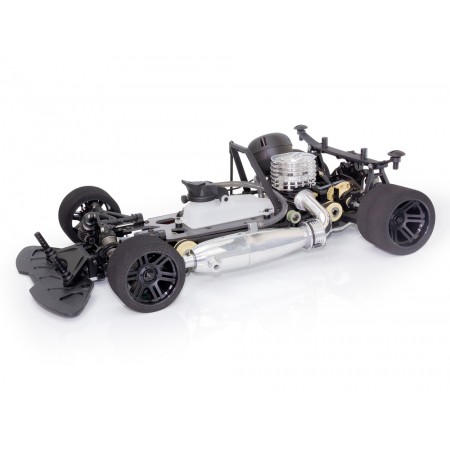 Based on the World Champion IF15, this wide chassis kit features exclusive new front and rear shock towers and body mounts as standard items, as well as wide tires to create a 235mm wide race chassis for use with racing-type body. The newly designed front one way drive is included in the kit to help produce sharp turn in that matches the racing-type body. The racing-type body boasts unparalleled aerodynamic performance providing higher cornering speeds than that of a regular sedan body. Most of the existing optional parts for the IF15 can still be used allowing you to upgrade your car and improve performance. 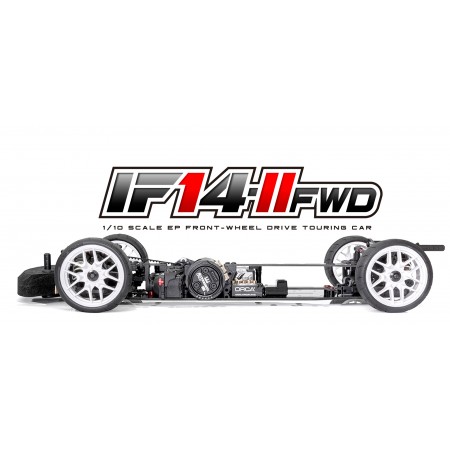 Newly designed 1/10 scale electric FWD touring car based on the IF14-2, which has proven its high potential in many races.
The ideal front-rear weight balance for a FWD touring car has been achieved. The result is a model that balances cornering speed and traction at a high level, and gives you easy and fun driving that is typical of FWD touring cars.